We offer a variety of services to Kilgore College students, faculty and staff. Some of the services available in person may also be available online. For instance, Bibliographic Instruction is now available online in the form of tutorials. Reserve materials, however, are only available if you come to the library and ask for the item at the Circulation Desk.

We also have desktop computers, copiers, printers, scanners, wireless access and numerous other services available to our students.

Distance Education is supported by the library in that we will send needed items through the mail, when needed or possible, to students taking Distance Education courses. Just give us a call or send us an email. And don't forget the wealth of information available to you through the databases and ebooks!

The primary mission of the Randolph C. Watson Library is to provide access to a broad range of informational resources and services that support the mission of Kilgore College. The library will serve as a partner in the teaching and learning process by working with faculty to identify and provide resources to support the curriculum and by providing instruction in the use of the library by educating users to effectively access, utilize and evaluate available information resources.


History (Who is Randolph C. Watson?) 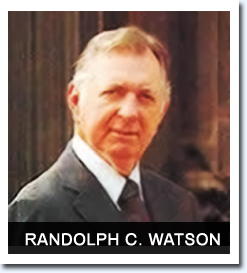 Dr. Randolph C. Watson was the fourth President of Kilgore College. A native of East Texas, he graduated from Henderson High School. He received his bachelor's and master's degrees from Texas Christian University. That institution also awarded him an honorary doctor of laws degree in 1966. Dr. Watson began his career in education in 1935 as a teacher at Laird Hill Elementary School. In 1937, he became principal of the school.

Following military service in Europe during World War II, Watson joined the Kilgore College faculty in 1945. He soon became chairman of the Social Science Department. In 1947, he was appointed Director of the Technical-Vocational Division. He became Dean of Kilgore College in 1953. In 1964, Watson was named as President of Kilgore College and served in that capacity until his retirement in 1978.

In 1966, Kilgore College adopted a new logo bearing the words "Emphasis Excellence." This slogan reflected Randolph C. Watson's dedication to improving the quality of education. His commitment to the expansion of its facilities and programs enabled Kilgore College to take its place among the leading educational institutions in Texas.